Growing your retirement account requires consistency and thinking outside the box on occasion. Too many investors missed the boat on a huge opportunity. This opportunity is called investing in IRA approved Palladium and other precious metals.

By capitalizing on this investment, you’ll not only protect your wealth against a struggling US dollar. You’ll also have a chance to protect yourself against the rampant inflation running through the US right now.

Palladium has grown in wealth throughout the years and decades and it will remain a healthy and steadfast investment. How do I know? Past history proves that this investment will continue to increase in value over the years.

When investing in Palladium, you must do so by choosing IRA approved coins, bars, and rounds. Otherwise, you’re accidentally investing in precious metals that aren’t eligible for an IRA account.

To prevent yourself from making this mistake in the future, please continue reading to learn about IRA approved Palladium below.

How Did Palladium Receive Approval for Self-Directed IRA Investing? 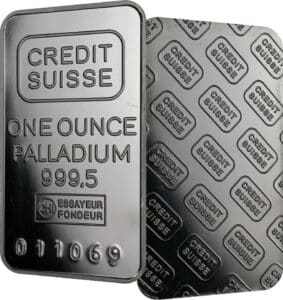 Palladium wasn’t always considered a valid investment in self-directed IRA accounts. Believe it or not, it’s only in the past 24 years that this investment opportunity became IRA acceptable. And it all boils down to a government bill that was designed to help provide tax relief.

What was it called? The name of the tax relief bill is called the Taxpayer Relief Act of 1997. In this approved bill, one stipulation was that it was now possible to purchase precious metals for self-directed IRA.

But as I’ve mentioned, only certain Palladium metals meet the specific requirements provided by the IRS. They have strict rules and regulations in place that must be followed at all times. Their rules are as follows:

This may or may not be something you know, but collectible palladium coins aren’t acceptable for a precious metals IRA. This is true except in one situation. The acceptable collectible coin is called the US proof coin. And in this particular situation it would be a platinum US proof coin.

Nonetheless, investors are much better off avoiding palladium proof coins like the plague. Why is that? I personally do not like them even though they may be attractive and all. But investors have to pay a big premium over the palladium spot price to own them. And it isn’t worth it because there are much better options. They do not charge a huge premium for the privilege of owning them.

It’s up to you whether or not you want to invest in US proof coins. As I mentioned, they are the only collectible coins allowed in a precious metals IRA. But the markup is steep and totally not worth it in my opinion.

Ineligible Coins, Bars, and Rounds for a Palladium IRA

Is It Mandatory to Store IRA Approved Palladium in a Depository or Vault?

Every investor needs to know the rules of the game regarding palladium IRA accounts. And one critical rule that everyone needs to know is that IRS approved storage is an absolute must.

All investors have to store their gold, silver, platinum, or palladium investments in a depository or vault with proper approval. Otherwise, they will intentionally or unintentionally break the rules and that’s never a good thing regarding the IRS.

Although, you’ll also have an IRA custodian watching your back. They’ll never allow you to break the rules on their watch, so there’s nothing to worry about in this regard.

Don’t worry about putting your investments in a storage facility. First, it’s relatively inexpensive since it typically costs between $100-$150 per year. And second, it’s a guaranteed way to keep your investments safe at all times. You’ll sleep well at night knowing that your palladium coins and bars are safely stored in a protected vault.

The IRS has approved and recommended six different depositories throughout the years. It’s important to keep your precious metals safe in one of these important storage facilities. The names and other pertinent information about the official depositories include:

Can Purchase Physical Palladium for My Precious Metals IRA?

Precious metals are a powerful investment and they will remain this way for many years to come. Owning the physical metal means that they could never take it away from you.

How Can I Discover the Best Palladium Investments for My Precious Metals IRA?

You may believe that it’s going to be difficult to find the right palladium IRA investments. But believe it or not, your palladium IRA company will help you every step of the way. The only catch is that you have to stick to minimum fineness levels. They include the following:

Why Do I Need a Palladium IRA Account Custodian?

An IRA account custodian is an absolute must. They maintain your tax records, perform other custodial duties, take care of all of your paperwork, and manage your investments.

Are you on the verge of opening a palladium IRA account? By now, you’re undoubtedly interested in purchasing IRA approved palladium and other investments. The smart way to get started with this endeavor is to learn about the best platinum IRA companies in the business. Read my review to help you decide when it’s time to choose a good precious metals IRA company. This will help you meet your precious metals IRA needs.