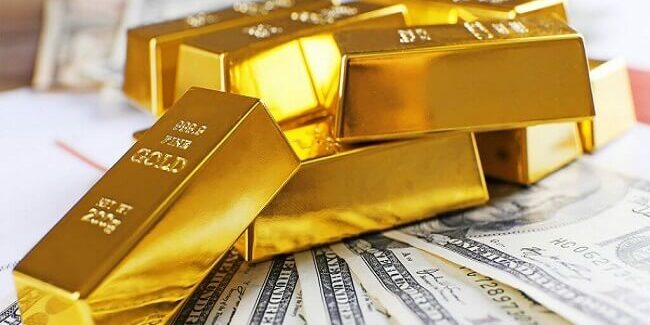 A dollar collapse is when the value of the U.S. dollar plummets. Anyone who holds dollar-denominated assets will sell them at any cost.

That includes foreign governments who own U.S. Treasury bonds and other assets. It also affects foreign exchange futures traders. Last but not least are individual investors.

When the crash occurs, these parties will demand assets denominated in anything other than dollars.

The collapse of the dollar means that everyone is trying to sell their dollar-denominated assets, and no one wants to buy them. This will drive the value of the dollar down to near zero. It makes hyperinflation look like a day in the park.

Two Conditions That Could Lead to the Dollar Collapse

Two conditions must be in place before the dollar could collapse:

1) An Underlying Weakness in the Dollar

First, there must be an underlying weakness in the U.S. dollar.

Between 2002 and 2018, the dollar has declined 6 percent according to the U.S. Dollar Index. Why? The U.S. debt almost more than tripled during that period, from $6 trillion to $22 trillion.

The debt-to-GDP ratio is now more than 100 percent. That increases the chance the United States will let the dollar’s value slide as it would be easier to repay its debt with cheaper money.

2) The Presence of a Viable Currency Alternative

Second, there must be a viable currency alternative for everyone to buy. The dollar’s strength is based on its use as the world’s reserve currency.

The dollar became the reserve currency in 1973 when President Nixon abandoned the gold standard. As a global currency, the dollar is used for half of all cross-border transactions.

That means central banks must hold the dollar in their reserves to pay for these transactions. As a result, 61 percent of these foreign currency reserves are in dollars.

The next most popular currency after the dollar is the euro. But it comprises less than 30 percent of central bank reserves. The eurozone debt crisis weakened the euro as a viable global currency.

China and others argue that the world should use an entirely new currency as the global currency norm. China would like it to be its currency, the yuan. That would boost China’s economic growth.

It is not a surprise that the dollar’s drop in value alarms China. That’s because it is the largest foreign holder of U.S. Treasury bonds, so it has been watching its investment deteriorate.

The dollar’s weakness makes it more difficult for China to control the yuan’s value, which is pegged to the dollar.

Could Bitcoin replace the dollar as the new world currency? It has many benefits. It’s not controlled by any one country’s central bank. It is created, managed, and spent online.

It can also be used at brick-and-mortar stores that accept it. Its supply is finite. That appeals to those who would rather have a currency that’s backed by something concrete, such as gold.

But there are big obstacles. First, its value is highly volatile. That’s because there is no central bank to manage it.

Second, it has become the coin of choice for illegal activities that lurk in the deep web. That makes it vulnerable to tampering by unknown forces.

The Economic Event that Could Trigger a Collapse

These two situations make a collapse possible. But, it won’t occur without a third condition. That’s a huge economic triggering event that destroys confidence in the dollar.

Altogether, foreign countries own more than $6 trillion in U.S. debt. If China, Japan or other major holders started dumping these holdings of Treasury notes on the secondary market, this could cause a panic leading to collapse.

China owns $1 trillion in U.S. Treasury notes. That’s because China pegs the yuan to the dollar. This keeps the prices of its exports to the United States relatively cheap.

Japan also owns more than $1 trillion in Treasury notes. It also wants to keep the yen low to stimulate exports to the United States.

Japan is moving out of a 15-year deflationary cycle. The 2011 earthquake and nuclear disaster didn’t help.

Would China and Japan ever dump their dollars? Only if they saw their holdings declining in value too fast and they had another export market to replace the United States.

The economies of Japan and China are dependent on U.S. consumers. They know that if they sell their dollars, that would further depress the value of the dollar.

That means their products, still priced in yuan and yen, will cost relatively more in the United States. Their economies would suffer. Right now, it’s still in their best interest to hold onto their dollar reserves.

China and Japan are aware of their vulnerability. They are selling more to other Asian countries that are gradually becoming wealthier. But the United States is still the best market in the world.

Effects of the Dollar Collapse

A sudden dollar collapse would create global economic turmoil. Investors would rush to other currencies, such as the euro; or other assets, such as gold and commodities.

Demand for Treasury notes would plummet, and interest rates would rise. U.S. import prices would skyrocket, causing inflation. U.S. exports would be dirt cheap, given the economy a brief boost.

In the long run, inflation, high interest rates, and volatility would strangle possible business growth. Unemployment would worsen, sending the United States back into recession or even a depression.

Introduction to a Gold standard

Since the days of King Solomon of Israel, civilizations around the world have been fascinated by gold’s monetary qualities.

Gold settled international debts. You could also exchange it for paper money. And under what’s referred to as “the gold standard,” all the world currencies were defined by a set quantity of gold.

As simple as it sounds, the gold standard was a truly complex system. Read more to find out what many experts have to say about it.

We will show what historians, gold buyers, and economists are referring to when they reference the gold standard. We will also include the many ways its demise could affect the U.S. economy even today.

How Did the Gold Standard Work?

“The principle behind a gold standard is to make a currency that is as stable in value, neutral, unchanging, and reliable as possible—the monetary equivalent of a standard measure like a kilogram or meter.”

In short, the goal is to prevent the monetary distortion that results from a currency’s market volatility.

Under the gold standard, a country’s money supply was tied to gold. Fiat currency—or paper money—like cash, could be converted into gold on demand. This naturally limited the supply of currency in circulation since it had to stay within a certain ratio to the supply of gold.

In addition to functioning as a tool for regulating the quantity and growth of a country’s domestic currency supply, the gold standard was also used on an international level.

Under the standard, two countries with different currencies could easily determine the market value of one currency in terms of the other, and vice versa.

Since participating countries maintained a fixed price for gold, they also fixed the rates of exchange between currencies tied to gold.

This predictability and fixedness, says Grant, encouraged trade and limited the aggressive money-policy interventions that we see today. “As there was only so much gold, there could be only so many dollars, pounds, French francs or German marks.”

The Rise and Fall of the Gold Standard

By 1900, all countries, except for China and some countries in Central America, had adopted some form of gold standard.

According to the World Gold Council, the widespread adoption of the gold standard was highly successful for the world economy. World trade expanded and many countries benefited from rapid growth and low instability.

As such, conditions were favorable to the degree that there were substantial flows of “direct investment that opened up the ’emerging markets’ of the era, such as the Americas, Australia, New Zealand, and South Africa.”

This lasted up until WWI, when the cost of war weighed so much on countries that they abandoned the gold standard and resorted to inflationary policies to finance the demands of war, and later, reconstruction. (Remember, under a true gold standard system, paper money is limited.)

Despite periodic attempts in various countries to return to a gold standard after the war, most did not survive the Great Depression of the 1930’s.

The U.S., in particular, severed its last ties between the dollar and gold in 1971 when President Richard Nixon announced that the U.S. would officially no longer back the dollar with gold reserves.

Gold prices then rose 2,330 percent that decade from $35 per ounce to $850, reports Kitco Contributor and CEO of U.S. Global Investors Frank Holmes.

Runaway Debt in the U.S. Beats GDP Growth in Trillions of Dollars

The purchasing power of the dollar also fell severely, declining by 85 percent since the U.S. moved away from the gold standard in 1971, according to calculations by Peter Ferrara, former Associate Deputy Attorney General of the United States under President George H.W. Bush.

While governments have always had tools with which to steer the economy, the fall of the gold standard opened up wider avenues for them to do so.

A Return to the “Golden Period of the Gold Standard”

For many, the advantages of the gold standard remain strong. With it, central banks have less unchecked power, world price levels are effectively anchored, and international exchange rates are more predictable.

Even former Fed Chairman, Alan Greenspan, has returned to being a proponent of the gold standard after speaking out otherwise for more than a decade.

In a July 2016 interview discussing U.K.’s Brexit referendum, U.S. economic growth, wage stagnation, and more, he suggested that the world may have been better off if the U.S. had never abandoned the gold standard.

In the wake of Brexit especially, Greenspan believes a “debt crisis will be inevitable,” as he has no faith that political leaders will “restrain entitlement spending” when another crisis breaks out.

“[I] would not be surprised to see the next unexpected move to be on the inflation side,” he says. What is his solution to high inflation? Good old gold.

As economies all over the world continue to struggle with a variety of problems, gold could be a solution to protecting your money and increasing your wealth potential.

Unlike the dollar, gold cannot increase its own supply to suit the day’s political agenda.

In fact, “physical gold is very scarce,” says author and gold market veteran Jim Rickards, and no one is sure how much gold remains embedded in the earth or how much it would cost to mine it.

Whether the U.S. returns to a variation of the gold standard in the future or not, you can work to safeguard your wealth by owning gold.

Read more about why we recommend a gold IRA as your best option for investing in gold.

Do you have any questions on the fall of the U.S. dollar and the inevitable return to the gold standard? Ask below!