What is an IRA Rollover? 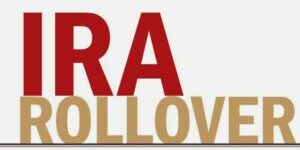 IRA’s are special brokerage accounts designed to allow individuals to save money for their retirement and manage their portfolios.  There are two types of IRA’s: Traditional or Roth. There are also two types of contributions to an IRA:

These contributions can either be tax-deferred or not. This can get a bit complex since taxes and the IRS are involved, so let’s go over the similarities and differences.

To begin with, rollover contributions come from an investor’s 401(k), 403(b), or other retirement plan.  There isn’t technically such a thing as a Rollover IRA; it’s actually a type of tax-free distribution from one retirement plan to another.

However many brokerage houses will designate new IRA’s that are created from a rollover so that the IRS knows that the new account contains assets that were transferred from another 401k, 403b, another IRA or some other qualified plan. Because rollover contributions come from an existing tax-advantaged retirement plan, the rollover contribution isn’t typically taxed or subject to the annual limitations of direct contributions.

A rollover Individual Retirement Account (IRA) is an account that allows for the transfer of assets from an old employer-sponsored retirement account to a traditional IRA. The purpose of a rollover IRA is to maintain the tax-deferred status of those assets. Rollover IRAs are commonly used to hold 401(k), 403(b) or profit-sharing plan assets that are transferred from a former employer’s sponsored retirement account or qualified plan.

Rollover IRA funds can be moved to a new employer’s retirement plan. Rollover IRA’s do not cap the amount of money an employee can roll over and they permit account holders to invest in a wide array of assets such as stocks, bonds, ETF’s and mutual funds.

What does ‘Rollover IRA’ mean?

By moving retirement plan assets through a direct rollover, in which the former employer’s plan administrator moves the assets directly to the rollover IRA, employees avoid having 20% of their transferred assets withheld by the Internal Revenue Service (IRS).

Alternately, assets can be moved using an indirect rollover, in which the employee takes possession of the plan assets and then places them into another eligible retirement plan within 60 days. With an indirect rollover, however, 20% of the account’s assets may be withheld and cannot be recovered until the employee files his or her annual tax return. If the movement of assets from a qualified employer-sponsored retirement plan to a rollover IRA is not handled correctly, the employee will face taxes. If he has not yet reached retirement age (59½), he will also pay early withdrawal penalties on those assets.

Most IRA programs allow a single rollover per year. Most rollover IRA’s are executed via direct (electronic) transfer or by check, though with the latter there may be a 20% withholding charge to ensure that the individual deposits the entire sum into the rollover IRA (essentially, a refundable tax charge). In the case of a transfer by check, the rollover check must be deposited within 60 days.

An alternative to rolling distributions into a rollover IRA is for the employee to roll them directly into a new retirement account with a new employer. Other options include rolling assets into a Traditional IRA, but this may have implications for transferring the funds to another employer’s retirement account in the future. The rollover money can also be converted into a Roth IRA, but taxes will be due since qualified employer retirement plan contributions are made pre-tax and Roth IRA’s can only hold post-tax contributions.

What Are the Disadvantages of a Rollover IRA Compared to a 401(k)?

With a Rollover IRA, there are tens of thousands of potential investments. For those with no financial background, this can be overwhelming. It can also present the temptation to frequently trade, which can result in substantial frictional costs and sub-par returns. Also, you can only take advantage of the Rollover IRA once each year.

The lifetime employment our grandparents once enjoyed, sadly, no longer exists in today’s competitive global economy. For the majority of the current and future workforce, the odds are good that at some point in their lives, they will leave their current employer due to company downsizing, outsourcing, termination, or in pursuit of new opportunities. It’s even possible they’ll quit just because they can’t face the prospect of going to work anymore.

If your employer offers a company retirement plan such as a 401(k), and you find yourself no longer employed due to reasons mentioned above, you have a few options regarding the assets you’ve invested throughout your employment. They are:

There are subtle differences between what is considered an IRA rollover, and what is considered an IRA transfer. The important thing to know – with either one in order for the rollover to be tax-free, the funds must be deposited in the new account no later than 60 days from the time they were withdrawn from the old one. Below are ten frequently asked questions about how these IRA rollovers and transfers work, and what you can and cannot do.

3) Transfering Funds From One IRA to Another IRA

4) Using IRA funds Tax-free If Depositing Back into IRA

5) Using an IRA Rollover to Move Part of Account

6) Inheriting an IRA and Rolling Into Your Own IRA 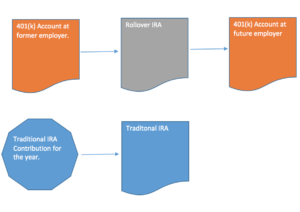 Amounts that must be distributed during a particular year under the required minimum distribution rules are not eligible for IRA rollover treatment. However, you can distribute shares of investments from your IRA to satisfy the RMD requirements. These shares can then stay invested in a non-retirement brokerage account. Whether you distribute cash or shares, any amount distributed from your IRA will be reported on a 1099-R and is included on your tax return as income.

IRA rollovers are reported on your tax return but as a non-taxable transaction. Even if you correctly execute an IRA rollover, it is possible that your plan trustee or custodian will report it wrong on the 1099-R they issue to you and to the IRS. I have seen this occur many times in my career.

If your custodian reported the transaction incorrectly, and you hand off the documentation to your tax professional without explaining the transaction to them, it could get reported on your return incorrectly. To make sure you don’t pay tax on an IRA rollover or transfer, carefully explain any IRA rollover or transfer transactions to your tax preparer, or double-check all documentation if you prepare your own return.

Recent tax rulings confirm that after-tax moeny in a qualified company plan can be rolled to a Roth IRA. This is a great option as Roth IRA money grows tax-free and you will not have required distributions from a Roth.

You may be able to use a special tax rule to distribute shares of company stock out of the plan once you are retired or no longer working there. This is a distribution option called Net Unrealized Appreciation (NUA). Some 401(k)’s may allow you to transfer existing shares directly to an IRA. Many institutions require the funds to go to your IRA as cash instead of as shares. Check with your 401(k) plan financial custodian to see what distribution options are allowed.

One major benefit of a Traditional IRA is that there is no income limit on contributions. Even if you make millions of dollars a year, you are still allowed to sock away contributions to a Traditional IRA and the earnings on that money will be tax deferred until withdrawal. However, your ability to deduct the contribution is phased out based on income and you or your spouse’s eligibility for a retirement plan at work.

Roth IRA’s do not have any age limits or a Required Minimum Distribution. You can open a new Roth IRA at age 85 if you want, and start saving for your “retirement.” However, Roth IRA’s have a very major restriction: you can’t contribute any money to a Roth IRA if your Adjusted Gross Income is above a certain amount. For single tax filers, that upper limit is $105,000 a year. For married people filing jointly, the upper limit is $167,000 as of tax year 2010.

Feel free to view our page on the Best IRA Rollover Options for more information on how you can rollover any of your retirement plans to an IRA containing gold and physical precious metals.

Do you have any questions on what is an IRA rollover? Ask below!